Crew members on a small tugboat heroically assisted in rescuing a man who was battling to stay afloat in open waters just outside San Francisco Bay, almost certainly saving the man’s life. 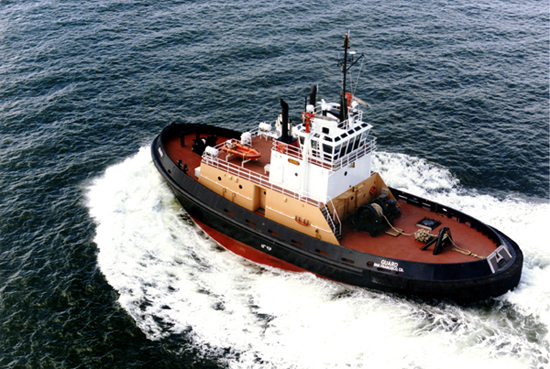 The crew of the Guard tugboat owned by Crowley Maritime Corporation rescued the man in the early hours of Wednesday morning, after the captain spotted a man struggling to tread water about a mile and a half away from the tugboat. The Guard was anchored alongside the Golden Gate Bridge, where it was about to tow a large tanker into the San Francisco Bay harbour when Captain Perry Overton noticed the man from the bridge.

Seeing that the man was in trouble, the captain quickly re-routed the Guard to rescue the man. Crew members threw a life ring to the man, who was fatigued and close to drowning and clung, exhausted, to the ring. Realising that the man would not be able to climb on board himself, the Guard’s chief engineer, Keith Madding, put on a wetsuit and immersed himself in the icy cold water to assist the man in climbing up the emergency ladder onto the Guard’s deck. The water temperature was measured at a cold 55 degrees Fahrenheit.

Once the man was safely aboard, crew members removed his clothing and treated the man for hypothermia, wrapping him in blankets and performing basic first aid. The Coast Guard were then contacted and arrived to assist the man shortly thereafter. The man was taken safely to shore by a Coast Guard vessel, and was transported to a local hospital where he was treated for hypothermia and exhaustion.

The crew members on the Guard returned to work as usual following the heroic deed, bringing the tanker in to San Francisco Bay harbour on schedule.

The San Francisco Police Department are currently investigating the incident, in collaboration with the National Park Service at Golden Gate National Parks. Ranger Shannon Jay said in a press release that there was no doubt that the Crowley crew members saved the man’s life. Jay also commended the crew on their professional rescue effort and their rapid response. ‘They are true heroes,’ he said. Senior vice president and general manager of Crowley Maritime Corporation, Rocky Smith, also congratulated the men on using their training and skill to save the man’s life.

The crew of the Guard has been nominated for a Citizen’s Aware for Bravery for the rescue.