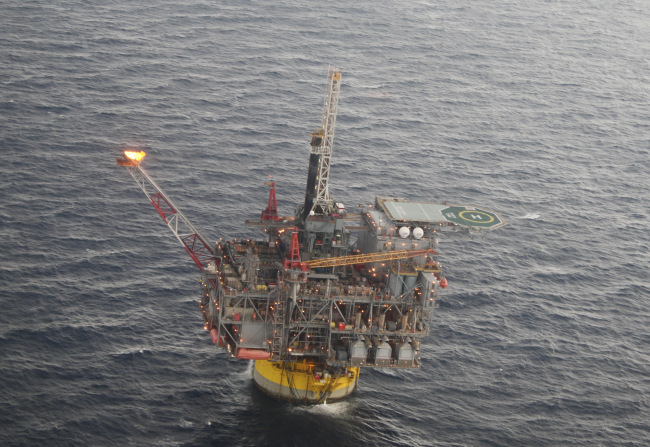 The U.S. Coast Guard and the Bureau of Safety and Environmental Enforcement (BSEE) are investigating an offshore oil rig fire in the Gulf of Mexico that left two maritime workers injured.

The fire aboard Royal Dutch Shell’s Enchilada platform was reported to the Coast Guard in New Orleans, Louisiana, around 1:20 a.m. on Wednesday, November 8th.

The fixed-leg platform is located about 112 miles from Louisiana’s Vermillion Bay.

46 workers were aboard the offshore oil rig when the fire broke out. All were evacuated and transferred to the nearby Salsa platform by the offshore supply vessel C-Liberty.

Two platform workers – both Shell employees – were injured in the incident:

A Shell emergency helicopter airlifted the two men to the University of Texas Medical Branch, Galveston. Both have since been released from the hospital.

Shell said in a statement that the fire was associated with a 30-inch gas export pipeline.

The blaze was contained by Wednesday afternoon, though a gas discharge (3-6 foot flame) was allowed to continue burning while the pipeline was depressurized.

“No harm to people or the environment is ever acceptable and Shell deeply regrets that this incident occurred,” the company said.

Shell has shut-in the Enchilada platform, as well as the nearby Salsa and Auger. The 30-inch gas export pipeline and nearby fields were also shut.

There is no timeline for restarting operations at the Enchilada platform.

“Though the structure is visibly sound, crews will continue to determine the integrity of the platform and formulate a plan for damage repair,” a company spokesperson told Reuters.

No Additional Reports of Pollution

A light sheen of oil was spotted in the water north of the Enchilada oil platform just after the fire broke out. A Clean Gulf Association oil spill response vessel was mobilized as a precautionary measure.

An update posted by the U.S. Coast Guard on Thursday indicated that there have been no additional reports of pollution.

The cause of the fire is not known. The Coast Guard and BSEE continue to investigate the incident.

Where You or a Loved One Injured in the Shell Offshore Oil Rig Fire? Call 1-888-302-3838 or Click Here for a Free Consult with our Undefeated Maritime Lawyers

Our Offshore Injury Lawyers are undefeated at trial and have recovered more than $1 billion for our clients, including hundreds of maritime workers seriously injured or tragically killed in fires and other accidents off the coast of Texas, Louisiana and the United States.

All consultations are free. And because we only represent clients for a contingency fee, you won’t pay us anything unless we win your case.